Since the introduction of the Government’s Plug-in Car Grant in 2011 registrations of electric cars has grown dramatically with 200,000 set to be on the road by the end of 2018. Fleets and businesses are leading the charge for plug-in cars and vans with more than 70% of EV registrations being made to UK businesses.

Deciding what type of vehicle is best for your fleet will drive the adoption of Electric vehicles with a key factor being distance. Electric vehicles are becoming an ever more viable option as battery ranges increase and charge points proliferate and the number of manufacturers offering electric vehicles is increasing. As Clean Air Zones develop and fuel prices and taxes rise switching to Electric Vehicles will become a must to reduce the bottom line. 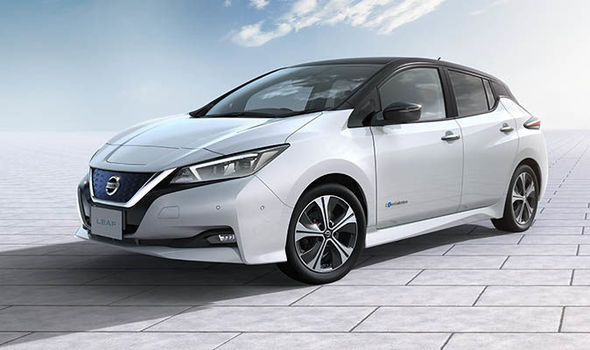 The old Micra shaped Nissan Leaf was the best-selling electric car within the UK, the Leaf revolutionary design being so popular that Nissan ran out of new vehicles ahead of schedule at the end of 2017.

The latest design takes the form of the new Micra and hosts a range of performance and interior upgrades. A new 40kwh battery has increased the output from the electric motor to 148hp and 236lb ft, upgrades of 38% and 26% respectively, and takes the Leaf from 0 -60mph in 7.9 seconds. Nissan claims a range of 235 miles on a single charge which is over 50 percent further than the current car.

The Leaf’s battery can either be charged with a 6.6kw charging socket or a high-voltage 50kW CHAdeMO quick charger. Nissan states that the quick charger can take the Leaf from empty up to 80% capacity in around 40 minutes, compared to the 7.5 hour charging time with the 6.6kW charging socket. You can also charge your car using a traditional socket but this takes the charging time to 21 hours.

There are four different trims with the new Nissan Micra; Visia, Conecta, N-Connecta and Tekna, with a “special version” – the limited-edition 2. Zero available in limited numbers at launch. The trim can make a substantial difference and Tekna trim has a reported range of up to 217 miles on a full charge, for example, making it the most expensive option. A new seven-inch full-colour TFT display can be found in all models which is compatible with both Android Auto and Apple CarPlay connectivity systems. The infotainment system also features audio and navigation control and Nissan’s Safety Shield technology.

A technology highlight of the new Nissan Leaf is the e-Pedal. The e-pedal can be pushed like a normal gas pedal but easing off will immediately slow the car down while lifting off completely will stop the car at low speeds. This lets you send energy back to the battery without having to apply the brake to make it a smoother, more energy efficient ride while city driving.

Jaguar’s first pure-electric model is a real contender in the premium electric SUV market, so much so that it features in one of our previous articles; A New Electric Contender – The Jaguar I-Pace

The five-seater Jaguar I-Pace is powered by two Jaguar motors with a combined 394bhp and 696Nm and goes from 0-60mph in 4.5 seconds. Powered by a 90kWh battery made up of high energy density lithium-ion pouch cells, the I-Pace delivers a stated range of up to 298 miles, according to the new WLTP cycle. That equates to 336 miles on the old NEDC test and 240 miles on the American EPA cycle.

At home, a 7kW wall box will charge the battery from 0% to 80% in 10 hours, while using a 50kw DC rapid charger, commonly found at most public charging stations, the I-Pace can achieve up to 168 miles of range per hour. The model is also compatible with 100kw public chargers, which will give an 80% charge in 45min but these are not yet available publicly in the UK.

The I-Pace’s futuristic cabin comes with a sweeping dashboard with three giant infotainment displays, two 10-inch screens in the centre console and another mounted behind the steering wheel replacing conventional analogue instruments. The centre dashboard allows access to the satellite navigation, stereo and phone functions, with the lower centre console being used to control secondary systems, such as the air conditioning and driving modes. The display mounted behind the steering wheel is similar to the Virtual Cockpit

Jaguar’s latest navigation system found in the I-Pace offers new functionality and features using topography and analysis from previous journeys to offer the most accurate range predictions possible. The I-Pace will also be the first Jaguar to get an Alexa link, allowing users to ask their Alexa devices for information about the car’s status and charge levels. The BMW i3 was one of the first new age electric cars on the market and has been around since 2013, with an innovative and bespoke design it still manages to look and feel more advanced than rivals based on regular production models.

The latest refresh of the i3 doesn’t change too much, you will find a new front bumper with new headlamps with LED functions for both the dipped and high beam. The new model also features a black roof, revised sills, lightly altered tail lamps graphics and a revised rear bumper.

The i3 is available as a pure electric vehicle or an electric vehicle with a range extender. The electric motor powered by a 33.2 kWh battery produces 168bhp which takes the i3 from 0-62 in 7.3sec and on to a limited top speed of 93mph with a real-world range of around 125 miles, the range extender model includes a small 37bhp two-cylinder petrol engine keeps the battery topped up on the move, adding about 90 miles of real-world range.

The latest facelift of the i3 brought about the new i3s, the new sports model produces 84 horsepower and 199 lb-ft of torque compared with the standard model’s 170 horses and 184 lb-ft, that takes the i3s to 60 mph in 6.8 seconds and produces a top speed of 100 mph. 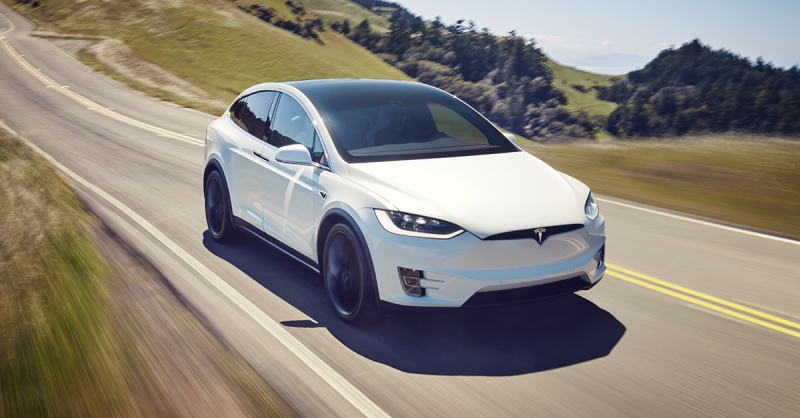 We couldn’t talk about electric cars without mentioning the Tesla Model X, it’s easy to forget about the Model X with the hype around the affordable but very lengthy wait time Model 3. Looking at the exterior of Tesla Model X you wouldn’t immediately think its an electric car, designed to rival “traditional manufacturers” it combines sports car-like performance with all the storage and practicality of a  full-sized SUV. Built on the same platform as the Model S and is predominantly made from extruded aluminium reinforced with boron steel, but unlike the Model S features striking falcon wing doors.

The Model X comes in a range of variants with the 75D model having the lowest power figure at the 0-60mph time in 4.9 seconds with a 259-mile range. The 100D is faster, going from 0-60mph in 4.7 seconds thanks to a more powerful motor and has a 351-mile range. Place the Tesla Model X P100D in ‘Ludicrous Mode’ and you can reach  0-60mph in 2.9 seconds, making it one of the worlds fastest accelerating SUVs.

The interior is futurist but minimal, featuring a high-definition 17.0in touchscreen that controls almost every function of the Model X including climate control, suspension, the stereo and sat-nav.  This is paired with another digital display that replaces the instruments in front of the driver that offers a lot of information but remains easy to read, with impressively sharp graphics. 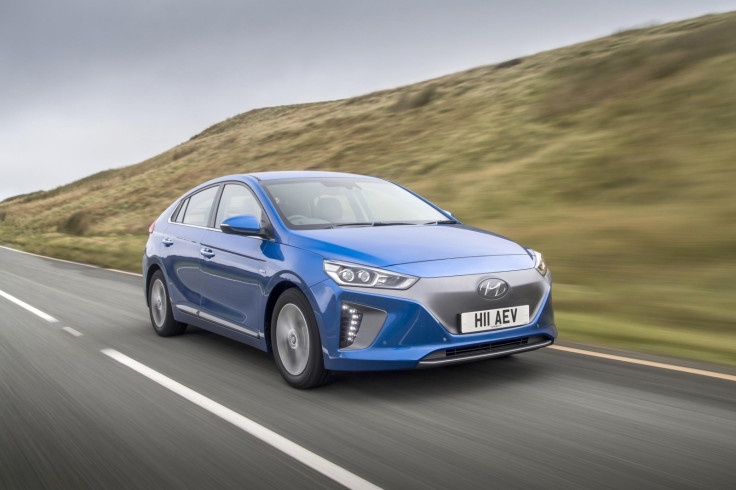 The multi-range Hyundai Ioniq offers both a hybrid and full electric powertrain as part of its model line-up, with a plug-in hybrid on the way. Targeting the market hold of the Nissan Leaf, the fully electric Hyundai Ioniq 28kWh lithium-ion polymer battery powers an 88kW (118bhp) electric motor which turns the front wheels and produces a real-world range of around 130-140 miles. This takes the Ioniq to 0-62mph in 10.2 seconds, If you switch to Sports mode and you can shave 0.3 seconds off that time. Replenishing the battery from empty takes 12 hours from a conventional plug and 4 hours using Hyundai’s home-install, £300 pod point or just 33 mins using a 50kw fast charger.

The Ioniq excels when it comes to comfort, aimed at being no more difficult to drive than a conventional car, it is quiet and refined, with lots of standard kit including; 6-inch alloy wheels, Android and Apple car play, a reversing camera, LED lights, adaptive cruise control and sat-nav. Upgrading to the Premium SE model adds automatic wipers, heated and ventilated electric seats and leather upholstery. 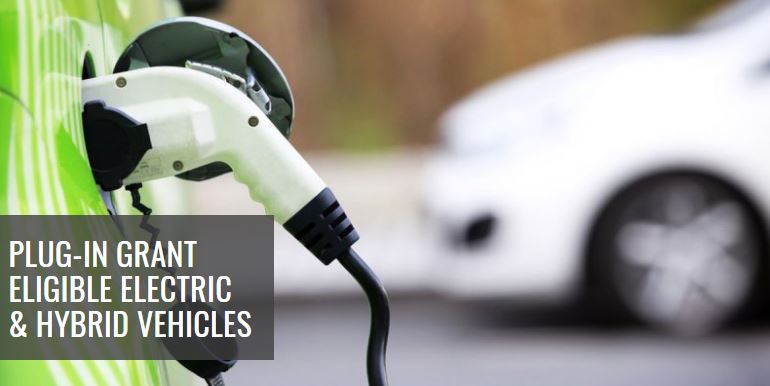